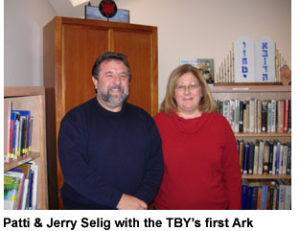 Temple Bat Yam a Reform Jewish Congregation located in Berlin, near Ocean City, Maryland was chartered in 1989. During the early years, the congregation had a Torah, a hand-written scroll containing the history of Judaism, which was on loan from another temple, but had no permanent home for almost ten years. The small group was on the move. They first met for Friday night services in the Art League of Ocean City on 94th Street Bayside. High Holyday Services were held at the Ocean City Convention Center, the Embers Restaurant and the Princess Royale Hotel. Community Passover Seders and Bar/Bat Mitzvahs were held at the Sheraton Fontainebleau Hotel, the Embers Restaurant and St. Peter’s Lutheran Church which was the second home for Temple Bat Yam.

The Torah is important to most of these occasions, so founding member Jerry Selig designed, and donated to the congregation an ark to hold the Torah, Sabbath candles, prayer books and other items used for services. And, it was on wheels. Yes, many people in Ocean City, without knowing what it was, witnessed a holy ark crossing Coastal Highway from St. Peter’s Lutheran Church, where it was stored, to the Sheraton Fontainebleau Hotel where some of the special services were held. For the eternal light on top of the ark, Martin Nadelman, a dean at Wor-Wic Community College, created a stained glass star of David with a small light inside.

Temple Bat Yam’s traveling ark actually did journey beyond Ocean City when it became part of a traveling exhibition by the Jewish Museum of Maryland titled “We Call This Place Home: Jewish Life in Maryland’s Small Towns”.

Finally, in 1997, the congregation completed a building of its own on Worcester Highway in Berlin, Maryland. The traveling ark was placed in a storage room at the temple, and all but forgotten.

On January 11, 2010 Temple Bat Yam’s founding rabbi, Rabbi Richard S. Sternberger passed away. He left many of his valuable books to the temple. Grayce Cohen, director of the Levy Library in the temple, was a good friend of Rabbi Sternberger, and she remembered how fond he was of the “Traveling Ark”.  She knew it was the perfect place for his books as well as items that serve as a chronicle of Temple Bat Yam’s history.

It now has a special place in the temple library, and is dedicated to the memory of founding rabbi, Rabbi Richard S. Sternberger, and to Jerry and Patti Selig who designed and donated the ark to the congregation of Temple Bat Yam. If needed for services, the book shelves in the traveling ark are removable, and the ark can once again become home to the Torah. An ark for all times and all places, which was Selig’s vision when it was first built.

The Story of Our Torahs

In his book “To Be a Jew”, Rabbi Hayim Halevy Donin explains that the Torah is the embodiment of the Jewish faith – that God’s will was made manifest in the Written Torah. Indeed, the Torah (The Five Books of Moses) is considered by some Jews to be the exact record of the word of God that was written down by the Prophet Moses.

The members of the synagogue that first housed these Torahs got word during WWII that the German army was coming. They built three
boxes, one inside the other for each Torah and buried them. The town was annihilated. Nevertheless, a document leading to the location of the Torahs survived. When they were found they were in excellent condition

They have been at Temple Bat Yam ten years, and recently needed repair. The Torah is a kosher document, and everything that makes up the physical torah is from a kosher source. Our Rabbi, Susan Warshaw took them to a Sofer (a licensed Jewish Scribe) to have them restored. They are back in good shape, and back in service to the congregation of Temple Bat Yam.

On December 8, 2013, the Temple dedicated its newest Torah, with a wonderful celebration. This development reflected a need for a full-sized, yet small light-weight, Torah that everyone in the Congregation, old and young alike, could carry, lift, and feel a connection with. Our addition was available from Temple Beth Israel in Carmel, California. Our Sofer (Torah scribe) Neil Yerman informed us that the Torah’s script was in the German style, probably from Northern Germany, and was about 100 years old. During the fall of 2013, the Temple initiated its Torah/Legacy project, which resulted in each donor being able to make a crown on a letter in the Torah. The Legacy Fund was not only for the Torah acquisition but also for the long-term support for the Temple.